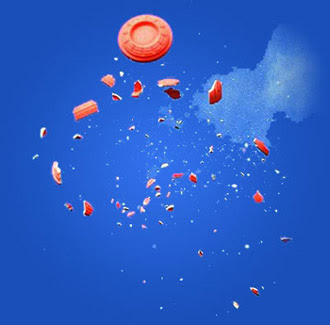 We had another awesome shooting trip today. This time of year we are putting out lots of trips each day, and although all of them showcase our passion for service excellence, some are exceptionally successful and just too enjoyable not to talk about. Today’s trip was an especially good example of how successful our teaching technique is. Over thirty years, Jon Hollinger (co-owner and chief shooting instructor-and my father) has developed a knack for introducing people to shotgun shooting. He begins the lesson with a short safety and general shotgun information session, and then starts the client out at a stationary target. While in front of the stationary target (called a ‘patterning plate’) Jon works on the mechanics of gun-mount, and reinforces the importance of stance an balance. Interestingly enough, properly mounting a shotgun takes some practice. From the stationary target, Jon moves the client to simple moving targets. “Incomers”, as he calls the slow and level incoming clay targets, are Jon’s favorite target to start novice shotgun shooters at. Once they start hitting the easy shots or “dusting” them as we say, Jon moves on to harder shots, and eventually a round of Skeet. It makes for an exciting half-day. 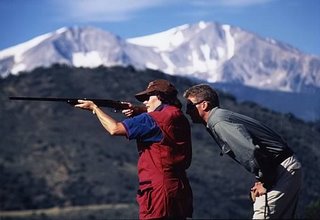 The clients yesterday were a charming couple from Hoboken, New Jersey. Sanford and Jan had done some shooting when they were younger, but estimated that they hadn’t held a shotgun in over twenty years. Jon went right to work, and in no time they were breaking even the toughest targets. It made for a very enjoyable afternoon, and as Sanford and Jan have just recently purchased some property in the area, I am sure that we will see them again very soon.