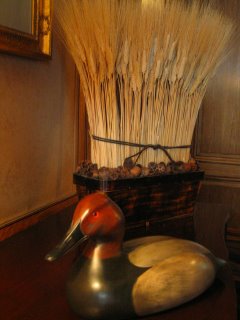 Another new addition to the Aspen Outfitting Company shop this week is the hand-carved decoy’s of Bob Cook. Mr, Cook is a native Georgian who began carving and painting wildfowl decoys over 30 years ago. His father, Clarence, was an accomplished wood worker and cabinet maker while his brother Nick is world renowned as a wood turner and wood turning instructor.
Bob has studied painting at the Atlanta College of Art and Colorado Mountain College. He has also studied with nationally recognized bird carvers such as Ernie Mills (shore birds and fish decoys), Mike Mason (decoy carving, painting and finishing), and Ernie Muehimatt (power carving raptors).
Since retirement, Bob, his wife Marsha and Abigail, their Bearded Collie, divide their time between Lake Burton in the mountains of north Georgia and Aspen where he specializes in decorative and working bird and fish decoys.
Bob is a member of the Ward Foundation, Ducks Unlimited and Trout Unlimited.