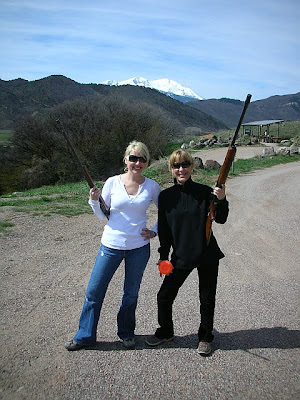 Sara and Carol do the ‘Charlie’s Angles’ pose with Mt. Sopris in the background
A few weeks ago I posted about the trip that head-guide Karl Page and I took to Branson, MO. to get certified by the NSCA as Level I instructors. Since returning, both Karl and I have been spending quite a bit of time on the range. Each of us volunteered a day for the annual Elks Club RFVSA Disabled Vetrans shoot, and we’ve also been doing lots of instructing for guests of the St. Regis Resort, Aspen. Karl and I focus on the beginning shooters, while instructor Kory Krahl and my father Jon Hollinger work with the intermediate and advanced shooters. 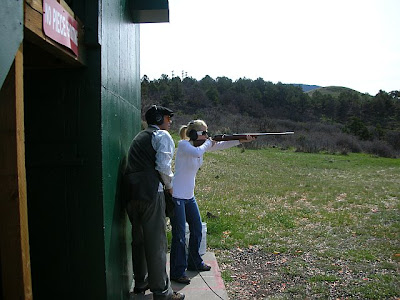 The Author looking on as Sara blasts a clay
When I met mother/daughter team Sara and Carol, I knew that we were going to have a great day. Although it was pretty early on a Saturday morning, they were enthusiastic about getting started with the sport of Shotgun shooting. Our half-day shooting trip takes beginners from the foundations of shooting all the way through breaking targets from several challenging presentations. Carol had done some shooting when she was growing up, and Sara had never shot a shotgun before, so we started with the fundamentals. Our main priority at Aspen Outfitting Company is to promote respect for firearms and practice safety while shooting. So, before any cartridges were fired, I showed the ladies how the various style of shotguns worked, briefly introduced them to the concepts of ballistics, and demonstrated proper stance and gun-mount. Sara had lots of great questions, and it was apparent that they were fast learners.
I started the ladies shooting at the patterning board, a stationary target about 25 yards away. We tried several different guns in order to find the ones that fit properly, and in no time both Sara and Carol were consistant with their stance and mount, and were able to focus on and hit the target every time. It was time to move to the Skeet range.
We started shooting going-away targets that closely resembled shooting at the patterning board. When they were comfortable with that presentation and consistantly breaking targets, we moved to a more challenging station. By the end of the session, Carol and Sara were breaking difficult crossing targets proficiently, and were considering Shotgun shooting as their new favorite sport. 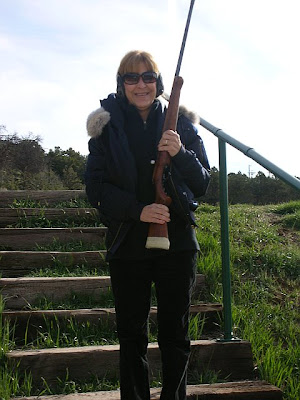